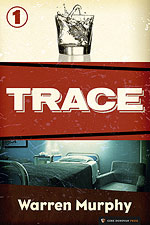 A patient at a private clinic died, shortly after making his doctor the beneficiary of his insurance policy. Suspicious. Now a wealthy friend of the Garrison Fidelity is a patient at the same private clinic, and he isn't doing well. Troubling. Solution: Send Trace, who has a natural way of shaking things up. On the surface everyone's friendly and nothing points to murder, fraud or larceny. A late-night beatdown from two masked thugs sends a very different message, however, and tells Trace that he's onto something. If only he could figure out what he's onto.