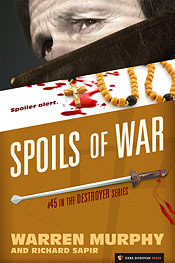 Father Malcolm McConnell heard the call of both God and country—his career in the cloth has been as a chaplain in the US Army. Father McConnell is devoted to the men, the mission and the military, but his congregation is decidedly diminished of late. There's a single sergeant still in the fold—they've virtually vanished! On visiting the church of Artemis Thwill, the upstart who's been poaching his parishioners, McConnell realizes there's more to the man than just a proselytizer. Thwill is famous. Thwill is dangerous. And now Thwill has an army. The United States Army.