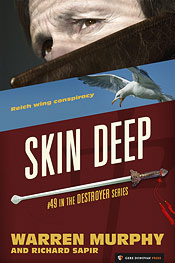 The USS Andrew Jackson departed from Key West with a top-secret, nuclear-equipped stealth bomber on board. Three days later it was discovered, listing, its dead crew bizarrely mutilated and the top-secret plane—and its pilot—missing. Fortunately for the President, CURE is already on the job, with Remo and Chiun hunting for a nuclear needle in the haystack. However, an old enemy of Dr. Smith's is lying in wait, putting the finishing touches on a plan that's been 35 years in the making. With stakes this high, Remo, Chiun and Smith could be facing their most dangerous mission ever. Possibly their last.