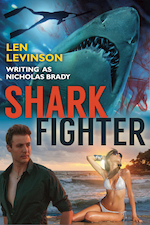 Sam Taggart, a hard-drinking Vietnam vet, lives on the tropical island of Makura. His job is hunting sharks—shark meat is an expensive delicacy for the high-end resorts on the island. Fighting sharks isn't about making money for him—he does it partly because it's something to do, and partly because he likes staring death in the face. He gets convinced to fight sharks on TV for a cool $2,000,000, but there are twists and turns along the way, as you'd expect—and also plenty of drug use, recovering drugs from underwater, firefights with the Mafia, heavy drinking, bopping various random women until a supermodel blows into his life...you know, a normal day at the office.