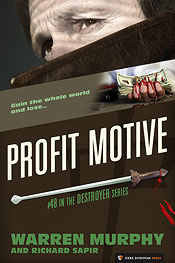 Norbert Peasewell is one of the best minds of his generation. A pacifist, though it's his own blood, he wouldn't stop a mosquito from making a meal of his arm. An idealist, though he has a PhD in the philosophy of advanced computer science, he believes that computers, corporations, and governments are intrinsically evil. He swears he won't work for them...until his wife leaves him and he's forced to fend for himself. Then he creates a program to ensure he'll never go without another meal again...a program dedicated to pure profit. A program that calls itself "Friend." But what's in a name?