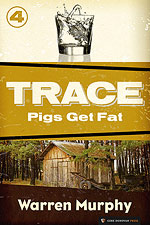 Thomas Collins is a commercial real estate agent with an insatiable sexual appetite. He'd do unspeakable things with a snake, a friend confides, if only he could get that low. Normally, that'd just be Mrs. Collins's business, but Mr. Collins is a policyholder of the Garrison Fidelity Insurance Company. A policyholder who seems to have disappeared.

San Francisco, 1985. The Mission was run-down, bean sprouts were a punchline, and Devlin "Trace" Tracy was on vacation. Until Groucho called and actually said "please." Being an insurance investigator on retainer means making certain sacrifices, and if Trace has to interview all the winsome, willing women in Thomas Collins' little black book? Well, duty calls.