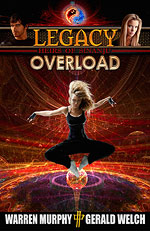 Bill 'Sunny Joe' Roam, a former Hollywood stuntman, leaves his home on the Sinanju reservation in Arizona to pay his last respects to an old colleague, bringing Stone and Freya, his grandson and granddaughter, along with him. But the respectful remembrance is quickly upset by Roam's former fellow stuntman-turned-action star, Stevie Sturgeon.

Decades have passed since Sturgeon and Roam worked together, but forgiveness doesn't come easily to the washed-up movie star, who is still seething with anger at Roam for making him look foolish twenty years ago. And when Freya accidentally knocks his toupee off, Sturgeon is out for blood. Sturgeon uses his reunion with Roam to hatch a plan for revenge. Unfortunately for Sturgeon, picking on Roam's granddaughter might be the biggest mistake he'll ever make.

Sinanju, a little-known tribe of Native Americans in the Southwest, has an ancient secret: it is home to the descendants of the greatest assassins and martial artists of all time. And, unknown to Sturgeon, Bill Roam, Chief of the Sinanju tribe, has trained Stone and Freya in the ways of Sinanju.

But Sturgeon has a few tricks up his sleeve, too. He hires Freya to star in a video game, and if Stone and Freya aren't careful, it might be "Game Over" for them. In this game, there are no cheat codes...and death is for real!