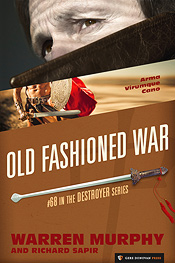 On every continent, all around the world, simmering conflicts are coming to the boil. One man's freedom fighter is another man's terrorist, but no matter their philosophy, these suddenly impassioned patriots all seem to have one ally in common: the mysterious Mr. Arieson. The man is everywhere at once, providing arms, strategic advice, or the perfect words to fan the flames of violence. And he's untouchable by Sinanju's blows! Chiun knows the secret to defeating this invincible enemy, but finding the lost treasure of Sinanju may be more important to him than restoring the peace.