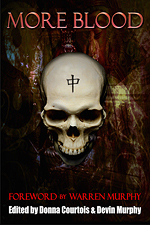 Warren Murphy and Richard Sapir’s DESTROYER series is one of the longest-running and most successful action series in history. With more than 150 books, a TV show, a movie, a spin-off series, and much more coming soon, it shows no signs of slowing down.

One reason the Destroyer series has endured for such a long time is the cultural myth it created—a young and brash Westerner, trained in martial arts by an ancient Asian master.

It has also survived because of the fans, who have supported and embraced the series for more than four decades.

This book exists because eighteen of those fans had their own stories. Eighteen stories related to the magic, the mayhem, and the mysticism of Sinanju, the world’s greatest martial art. Eighteen stories, each with a new vision of the DESTROYER.

And, of course, MORE BLOOD.