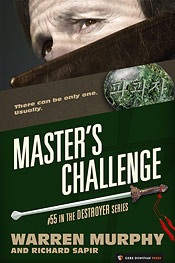 For thousands of years, the best warriors of the world have met once in a generation for a trial of mortal combat that originated with the first master, the Great Wang himself. Sinanju has always triumphed, but legend has it that in a year of the tiger, a Master of Sinanju will fall at the hands of a powerful force, known only as The Other. Will the Destroyer become the destroyed?

Meanwhile, with Remo and Chiun not returning his calls, Smith must keep the president safe by himself. The lemony-faced Man from Folcroft will have to dust off his OSS skills and return to the field, confronting bombs, bullets, babes and the mysterious "B" in service of his country. Vengeance, destiny and myth collide in the Master's Challenge.