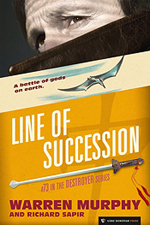 The secret of CURE is out and the president elect wants to terminate the organization. Assassination attempts are foiled by a rival bodyguard who seems to have a hidden murderous agenda. The Dutchman has returned with a vengeance, Smitty may be dead, Remo has quit his job to return to Sinanju where pterodactyls have been spotted and Chiun wants a raise. Remo and his nemesis meet again in what could be the pit of illusion and madness. When two Masters battle, there can only be one survivor. And there just may be an up-and-coming student.