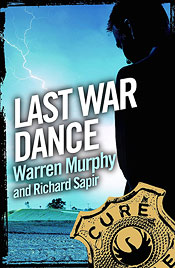 The Revolutionary Indian Party is demonstrating near the midwestern town of Wounded Elk, intent on a final showdown against the U.S. Government. Only CURE—and a lone retired Air Force general—knows that a doomsday weapon, codename Cassandra, is concealed within a nearby monument. Remo and Chiun are needed to divert an Indian attack against the monument, divert an Indian attack from the real local Indians, divert an impossibly dedicated KGB operative, and divert annihilation from a disastrous explosion. And as always, they're needed to maintain the secrecy of their operation in the face of 24-hour media coverage and a growing trail of bodies.