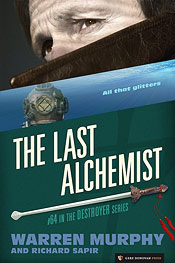 The legendary Philosopher's Stone has been recovered! Its surface bears an ancient formula that will enable one man to create and stockpile enough gold to found an independent nation—in the heart of America. Harrison Caldwell is on his way to becoming a modern-day Midas with the world at his feet, except for two men who plan to take it all away: Remo Williams and Master Chiun. Sinanju has many forms, but can the ultimate martial art defeat the Invisible Hand?