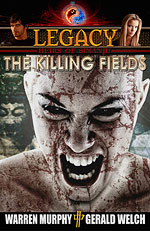 SUGAR AND SPICE
...and carbon-fiber bones.

The woman known only as "14" has been genetically modified and trained from birth to be a ruthless killing machine—no mercy, no questions asked, and no survivors.

In St. Louis, her latest killing spree has left dozens of innocent victims dead, and the questions are stacking up as fast as the bodies: what is her next target? Why is she doing this? And, most importantly, who is the mastermind behind the carnage?

Stone and Freya, the deadly brother-sister duo, are sent to stop the bionic killer before she strikes again. They've been trained in Sinanju, the greatest of all martial arts, so they expect it to be a quick and easy mission. But they were wrong—dead wrong.

As 14 and Freya develop an uneasy friendship, they discover an even greater threat: a diabolical dictator, hell-bent on destroying the United States in a nuclear holocaust!