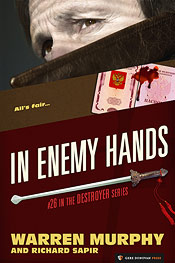 An all-out brawl has erupted across Europe as overzealous Russian hit squads clear the free world of the capitalist nuisance. With the CIA officially handicapped by a cautious congress, America's fight for freedom is failing. The President has no choice but to call Remo and Chiun to prevent the situation from completely getting out of control. However, the Russians won't go down without a fight, and send in a secret weapon that threatens not only to destroy the United States—but the Destroyer and his Master's very relationship.