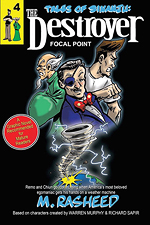 Tales of Sinanju: The Destroyer, Book 4

A HAPPY PLACE TO DIE

Sam Beasley, America's most beloved inventor, entertainer, and billionaire, has long had his sights on Japan as the site of his next mega-amusement resort complex. Unfortunately the Japanese leadership has failed to be equally enthused over Uncle Sam's selfishly insane visions, and have rejected them again and again. Harold Smith is forced to send Remo and Chiun after Beasley when his refusal to accept "No means no!" leads to tens of thousands of Japanese corpses, and a new plan to make the islands his once and for all.