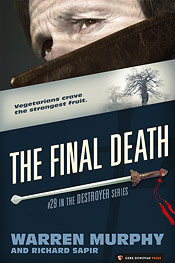 The appropriately named Vinnie Angus ran a small chain of steakhouses. He set out one cold, crisp morning for a day away from his life, but his hunting trip was tragically cut short. His body was found the next day by a hiker, strung up in a tree, drained of blood, his inside buried in the ground below. When CURE gets ahold of this news, it spells disaster, but even more so it is a prophecy realized only by Chiun, last living master of Sinanju. As Remo researches the enigmatic evisceration, the two begin to see the prophecy realized. Is it too late to break the curse?