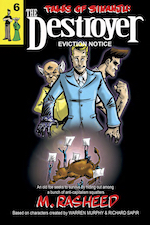 Tales of Sinanju: The Destroyer, Book 6

The over-educated, cynical, and furious Calle White leads the voice of his generation. Demanding an equal share of the massive wealth enjoyed by the smallest percentage of the nation's populace, the angry 'Squatters' gather at a bemused and irritated Wall Street, refusing to leave until the balance of power changes. Dr. Harold W. Smith considers the group ultimately harmless, until Mr. Gordons shows up, attracted to the demonstrators' message of an ascended survival into true prosperity. Lending his potent voice to that of an already agitated crowd, Remo and Chiun find that they really have to stay focused or the desperate robot just might even the score.