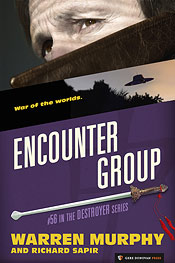 Amanda Bull-Schutz was just an angry, lonesome woman hitchhiking her way to Little Rock, Arkansas, until the World Master's spaceship materialized above her. Then she became Preparation Group Leader Amanda Bull, charged with readying mankind for its ascent to the next level of consciousness. Her task: to disable America's arsenal of nuclear weapons. This puts her at odds with the U.S. government, which puts her at odds with CURE, and, by extension, Remo Williams, all of whom would very much prefer that Amanda, her true-believers followers, and the World Master itself leave said arsenal alone. Master Chiun, however, isn't so sure...