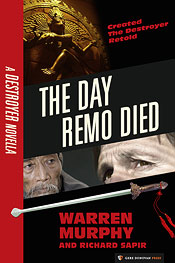 Remo Williams was a simple beat cop. Nobody special, really, until he came to the attention of a secret government organization. They had him killed. Then they brought him back to life, erased his identity, and trained him to be the perfect assassin. All under the pretext of defending the Constitution.

This is a story that's been told before—in Created, The Destroyer—but never like this. The Day Remo Died revisits the origin of the Destroyer through the eyes of Chiun, the Reigning Master of Sinanju. Chiun, the Teacher. Chiun, who has much to endure if he's to elevate a pale piece of pig's ear to mastery. This is the Day Remo Died. This is where it all begins.