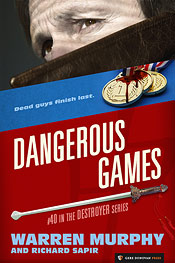 Middle Eastern powers have a chokehold on the world's dwindling oil supply. Revolutionaries in North Africa and the Middle East are overthrowing long-established governments, some installing military dictatorships, others setting-up Islamic republics. Skyjackings are on the rise, transatlantic tensions are high, and hawks see terrorists behind every bush. With Russia preparing to host the Olympics there's one point that international spy agencies all agree on: nothing must happen to the Games. It's a tinderbox, and one spark could set the world alight.