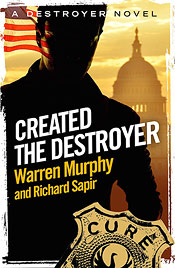 When you're on death row, minutes from the electric chair, and a hook-handed monk offers to save your life if you'll just swallow a simple little pill... what've you got to lose? You take the pill. Then you wake up, officially "dead," in the back of an ambulance, headed for an undisclosed location. Welcome to your new life, working for CURE, the most secret, most deniable, most extra-judicial government agency ever to exist. Only the President knows about it, and even he doesn't control it.

That's what happened to Remo Williams, a New Jersey cop framed for a murder he didn't commit. Framed by the very people who saved him, in fact. And now, trained in esoteric martial arts by Chiun, master of Sinanju, he's going to become the ultimate killing machine. Remo will be America's last line of defense against mad scientists, organized crime, ancient undead gods, and anything else that threatens the Constitution. Remo Williams is the Destroyer.

An action-adventure series leavened with social and political satire, the Destroyer novels have been thrilling readers worldwide for decades.