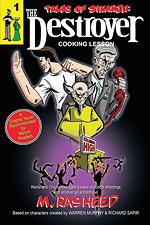 Tales of Sinanju: The Destroyer, Book 1

MANY SHOTS, MANY KILLS

The long-suffering underdogs of America's youth are mad as hell and they're not going to take it any more! But nowadays they're using the deadly recipes of a cookbook of anarchist infamy to slaughter the guilty and the innocent alike. Unfortunately for the nation's innocents caught in the crossfire, the trend is catching on and growing to epic proportions. Only Remo and Chiun have the skills to shelve the book permanently. But why has Robert Powers, the author who had denounced his evil book, backtracked out of a peaceful life to spread this new message of guns and death? And who is whispering the secret voice in his ear that dreams of both ancient conquests and bloody vengeance against the House of Sinanju?