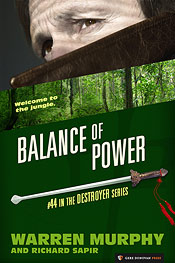 Barney Daniels was one of the best agents the CIA ever had. There was no problem too large, no mystery too complex, no interrogation subject too taciturn. Daniels cracked them all. But years in the Company take a toll on a man. He cracked too, and in the middle of a tiny Central American village, Barney Daniels called an international press conference, making the covert overt and openly admitting the CIA's clandestine involvement in the overthrow of Hispania's regime. An embarrassment to America and a liability to the CIA, the Destroyer is tasked with ensuring Daniels' silence. It's a job that rubs Remo the wrong way—so much so that it may be his last.