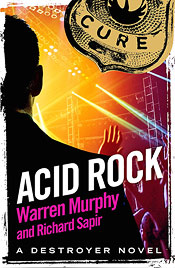 Vickie Stoner knows some things. Things that could put a number of very wealthy, very influential men in prison if she testifies about what she knows. At least one of those wealthy, influential men would prefer that she not, and has offered one million dollars to the first assassin to silence her. Vickie just wants to pop some pills, expand her mind and bed the lead singer of Maggot and the Dead Meat Lice. Which makes her a hard girl to keep safe. The FBI certainly can't seem to do it. Set a thief to catch a thief, so the saying goes; set the Destroyer (and Chiun) to catch an assassin.